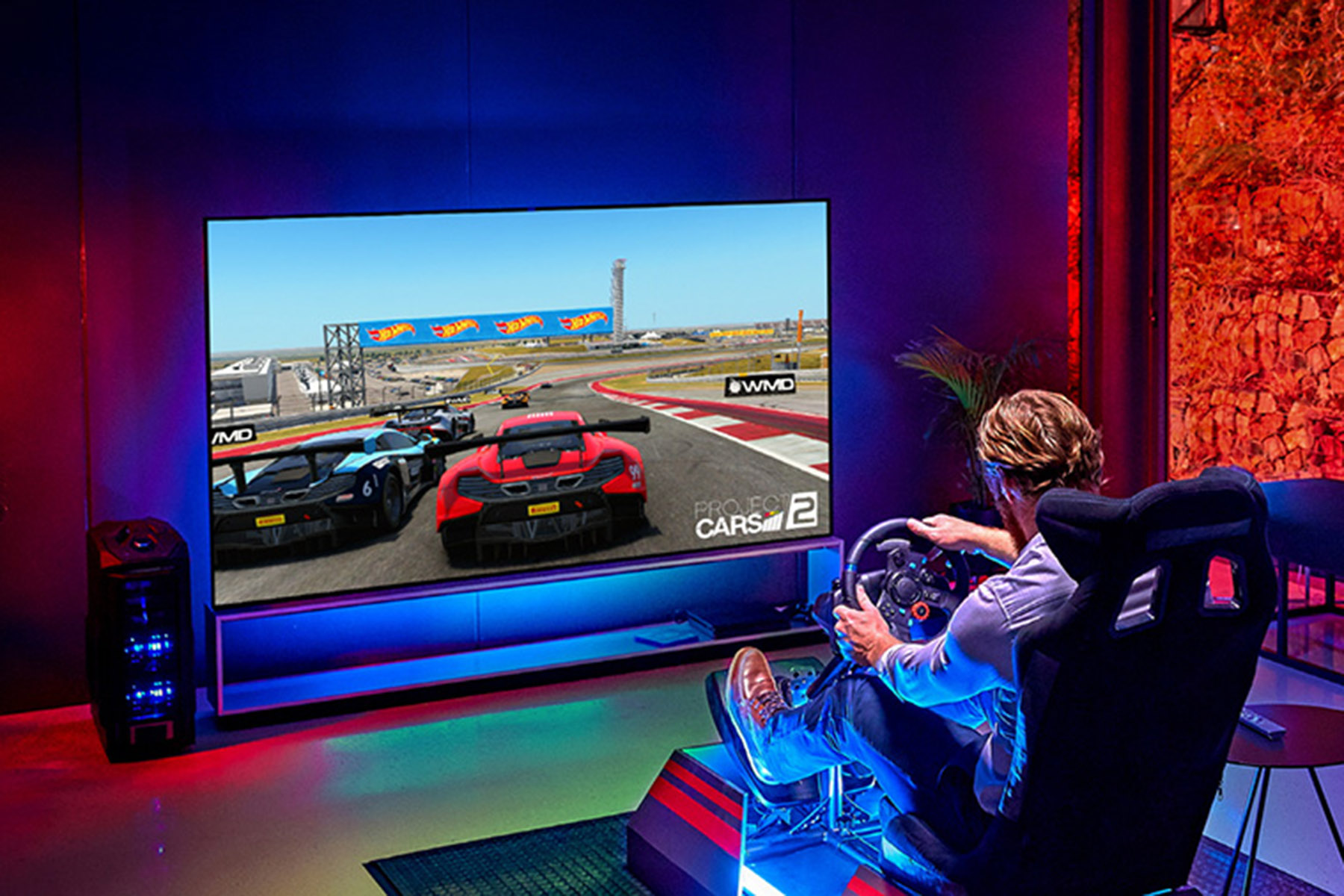 Does framerate matter for gaming on TV?

The past few years have seen great advancement in the quality of graphics of videogames. It might not be long before we are unable to distinguish between real life and video games. Games like Red Dead Redemption 2, Control, Horizon Zero Dawn, etc. have shown us just how far the graphics of video games have come. To match with the high-quality graphics, you need a high-quality display, so you can enjoy the stunning view of your game in the best quality.

While there are many gaming monitors with a great display and high quality, a large portion of people still prefer to use their TVs as their main displays. This becomes even more common with consoles, as mostly all console users use a TV as their display.

We need to understand the relationship between frame rate and refresh rate in a little more detail before going any further. As discussed above, the frame rate is how many frames the GPU processes in one second, while the refresh rate is how many times a new image is shown on the display. If there is a gap between the timing of the refresh rate and frame rate, we see tearing on the screen. This is because the GPU may process some frames faster, while other frames slower, but the display refreshes these images as soon as it gets them, thus making the display appear with some tearing. To manage this, displays use virtual-sync, a technology whereby new frames are loaded into the screen only after the previous frame has been refreshed by the display. This prevents tearing, but at the expense of a display lag.

The above images show how the frames work with and without vsync. This should help you understand the concept better.

Now we come to the question of whether framerate matters while gaming on a TV or not. A simple yes or no is not sufficient to explain this concept in full detail. There are many variables like the device on which you are gaming, the game, your habits, the performance of your device, etc. There are multiple reasons for this which are described in this article.

The previous generation of consoles ran most AAA titles at locked 30 FPS. While people on PCs ran these games at 60 FPS or more. The current generation consoles can run games at even 120 FPS. Some expensive PCs can easily run games over 240 FPS and use 240 Hz monitors. These are however used mostly by professional competitive gamers as a higher refresh rate gives a better advantage due to loading the image quicker. We need not talk about this in this article. Our talk will mostly be restricted to 120 FPS.

GAME GENRE– The genre and type of game matter a lot when deciding how many FPS is enough. A fast-paced action shooter looks much better and needs at least 60 FPS to look good. Meanwhile, a narrative-driven game like the Life is Strange, 30 FPS is more than sufficient. Action games require a better frame rate and refresh rate to look better because a lot of action is going on and there is a need for quicker and better performance. That is why, while playing an online game, people prefer a better frame rate over better graphics. Most competitive online gamers use 240 Hz monitors and try to keep their FPS above 240 to get the smoothest experience and use the advantage of the faster image loading.

That is why in most online games also, you would prefer higher FPS. In normal single-player games though, 30 FPS is decent enough to game. Many games nowadays have different profiles of the same game. One profile offers better graphics at 30 FPS while the other offers better performance at the cost of graphic quality. So, you are free to choose whatever you want.

GAMING DEVICE– The device on which you are gaming matters a lot as well. 30 FPS on a console looks much smoother than 30 FPS on a PC. This is even more prevalent while gaming on a TV. There are mainly two reasons why 30 FPS looks better on consoles. Firstly, the consoles have a constant frame pacing, making every frame change at a constant rate without any fluctuations. This is the main reason why 30 FPS looks better on consoles.

The second reason is the motion blur in games. The high-quality motion blur hides any tears or unsmooth edges, thus making the game appear smoother on consoles. On PCs, the frame pacing isn’t constant. Thus, even if you lock FPS to 30 from your PC settings, the game will look much less smooth when compared to the same game on consoles. This is why consoles can get away with only 30 FPS, while on PCs you need 60 FPS or more.

PERFORMANCE OF DEVICE– The performance of the device matters a lot as well. For example, if your console or your PC can run games only at 60 FPS at max, then purchasing a TV with a refresh rate of 120 Hz would simply be a waste of money as you would feel the difference only up to 60 FPS.

HABITS– The final factor affecting the smoothness of the games is the habit of the user. If the user is used to gaming on PCs at over 60 FPS, 30 FPS on TVs will look sluggish to the user. Once you have experienced a higher framerate while gaming, lower framerates seem slow. That is why PC gamers looking to use a TV as their display need at least 60 FPS to enjoy the game. On the other hand, if you are used to console gaming, even 30 FPS would be fine by you.

These factors affect how many frames per second do you need for your gaming needs. So, while purchasing a TV, you should ask yourself whether you are happy with 30 FPS or 60 FPS, or you need more FPS. Personally, I would recommend getting a TV with a refresh rate of 120 Hz. This is because the newest consoles are capable of running games at even 120 FPS. Therefore, you should enjoy the games at their best.

WHY ARE MOVIES SMOOTH ON 24 FPS, UNLIKE GAMES?

While there is a question on whether FPS matters while gaming, another question is why do movies appear smoother even at such a low frame rate. The movies we see are recorded and run at 24 FPS, yet we still see them as fine. However, games running at this framerate appear very slow and unplayable to most gamers. This problem worsens on PC. As discussed above, the last-gen consoles ran most AAA titles at locked 30 FPS. Still, these games appeared to run fine. However, while playing games at 30 FPS on a PC, the experience was much worse.

This is because movies have a natural motion blur, unlike games. The camera recording the movie is usually focused at one point and the film is then recorded and we watch it passively. However, in video games, the focus constantly shifts and we are interacting with an active world, not a passive one. This puts a lot of load on the GPU and CPU, thus causing some processing to take place. The depth of field also changes. While calculating and adjusting to the new view, there is not a constant frame pacing, thus making games look choppy. However, movies appear smooth because of they don’t suffer from the same set of problems.

Now we have to come to the question does frame rate matter while gaming on TVs. The answer is yes, it does matter. But how much it matters depends on various factors as stated above. If you are a console gamer, you will not be bothered by 30 FPS on your TV display while gaming. However, if you are an avid PC gamer, anything below 60 FPS on your TV will not be enough for you.

The newest generation consoles have the capability to run games at framerates up to 120 FPS. Therefore, even console gamers should get a high refresh rate TV to experience the best performance of their games. However, keep in mind, that many games on these consoles will have a Picture Mode and a Performance Mode. The Picture Mode will run the games at 30 FPS on 4K. It is for people who prefer the better graphics over the performance of their game. The Performance Mode runs games at better frame rates but with the loss of quality. Most of the time, games will be downscaled to 1440p or 1080p. This is for people who want to experience a smoother gaming experience over the graphics. 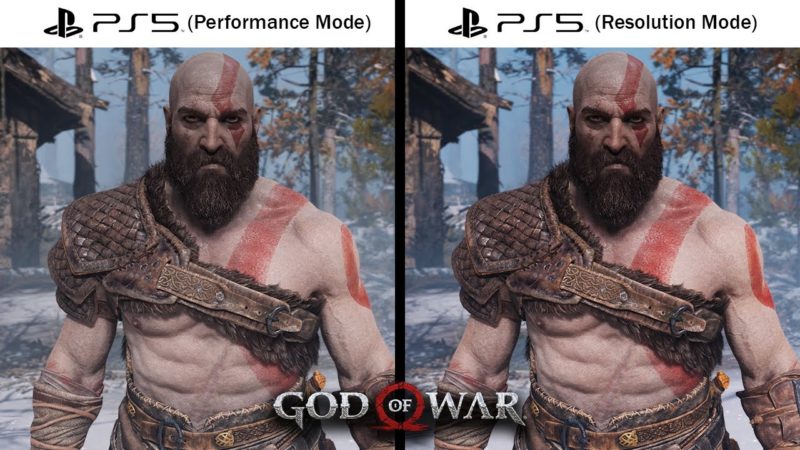 The above image shows the comparison between the graphics of God of War on PS5 while using the performance mode and the resolution mode. Although it is not that clear, the latter image has a much better graphic quality, but compromises on the framerate.

Thus, we see that depending upon your device and preferences, you should personally decide how much do FPS matter to you while gaming. As a PC gamer myself, I would say that 60 FPS is the bare minimum for me and anything below that is sub-par for gaming. That applies to TV as displays too. However, if I were a console gamer, owing to the past experience of gaming at 30 FPS, the constant frame pacing, and high-quality motion blur, anything around 30 FPS and more is more than good enough to enjoy the games.

So, yes, framerate does matter while gaming on a TV. The only question is how much it matters which can be answered by you only after analysing all the above things. Therefore, a big part of the question is subjective in nature and cannot be answered in a positive or a negative. However, in the future, 30 FPS will most likely become obsolete in gaming, so if you want to plan for the long term, you should always aim for at least 60 FPS.

Next ArticleBEST OFFICE CHAIRS FOR WORK FROM HOME IN INDIA 2021