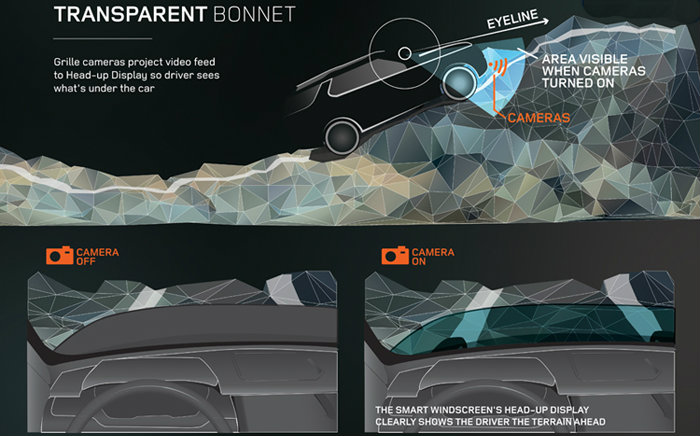 At first glance, mixing augmented reality with cars may not seem to be a good idea, but a new concept from Land Rover might change that opinion. It’s name is Transparent Bonnet , combining a series of chambers with a HUD (head-up display) to make  a transparent hood, allowing  the driver to observe the road conditions below.

There is plenty of treacherous roads, and a little extra knowledge can be the difference between a relatively safe trip and spending hours in a sunken trench (that being optimistic) . Of course, a good vehicle can offset some of the problems that arise in a complicated route, but we cannot expect to solve everything. Technology is trying to lend a hand, and with this I do not mean the construction methods applied on the car, or the integrated information systems. We’ve seen things like sensors that help maintain a safe distance from other vehicles, and motion detectors to avoid impacts. In a less experimental aspect, the use of cameras is ever expanding, especially in countries with high levels of corruption and fraud. What we have here today fully qualifies as a concept, and calls for nothing less than the augmented reality . Adding elements in the visual field of the driver could be counterproductive, however, but in this case, it seems to be a very good idea.

The official name of this project is Transparent Bonnet . The translation for “bonnet” is nothing more than hood, so we already have a good idea of its function from the name. The plan is to use cameras at the front of the car, which transmit images to a HUD display. The result is the feeling of a transparent hood , which helps to visualize the state of the road under the vehicle , and the position of the wheels. According to the words of Land Rover , the main applications for Transparent Bonnet would be for maneuvering in tight spaces and in difficult terrains. The system also can play additional information , such as speed and angles.

The company has not said anything about the arrival of Transparent Bonnet  in the market, but the New York International Auto Show is just around the corner (April 18) , and it has been confirmed that the technology will be present there. On one hand, I agree that it does not seem to be a very useful application of augmented reality on a traditional car, and on the other, I must not forget that this is Land Rover . Their vehicles have challenged hard roads for decades, and with that in mind,Transparent Bonnet would not be a bad idea.

You can read the official announcement here