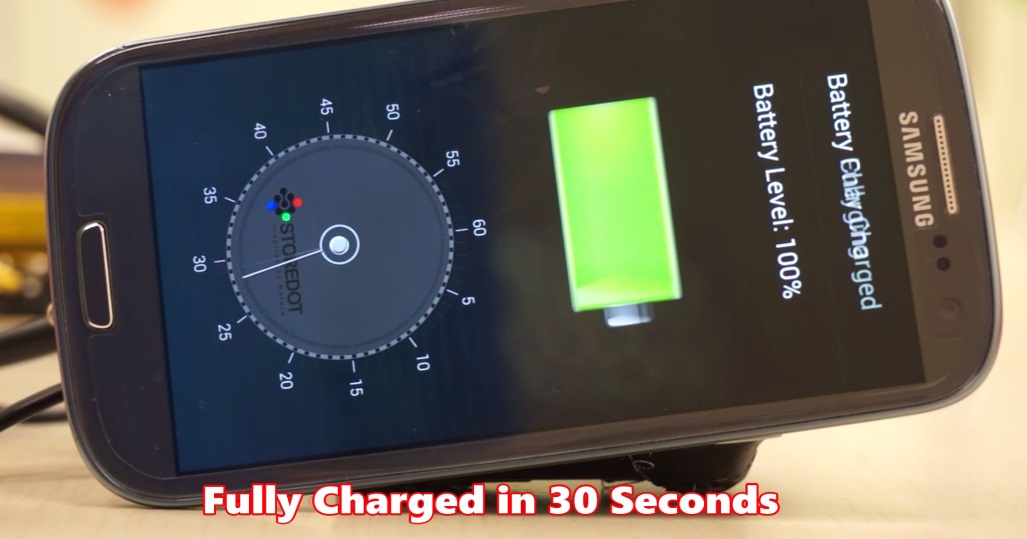 New smartphones may recharge the battery in 30 seconds!- Storedot

It would be like the “Holy Grail” between mobile devices. The battery life combined with the charging time is one of the most frustrating points on any smartphone or tablet , however, just came a battery prototype developed by the Israeli company StoreDot , with the help of a special charger promises a total restoration in just 30 seconds .

Yes, my smartphone is charging up as I write. And the only thing I hate about my smartphones,camera,tablet and my laptop is that its battery capacity is too low and it takes a lot of time to get charged up.I should either have a battery which stays charged for atleast a month of heavy use or it should get charged up instantly.The loss of autonomy among the new devices is felt at every moment, and we must be constantly surrounded by things like emergency chargers and laptop batteries . Technology should have a definitive answer to solve this problem. One option considered by experts is the supercapacitor , and although their recharging speed is very fast, it does not contain sufficient energy. In essence, what is needed is the best of both technologies , battery and supercapacitor. A company located in Israel called StoreDot , seems to have the perfect combo.

During the conference ‘Next Think’ that Microsoft held in the city of Tel Aviv, StoreDot conducted a demonstration of a battery that only needed 28 seconds to fully charge a Samsung Galaxy S4 . StoreDot has focused on nanodots , bio peptides -organic chemical synthesized with the ability to optimize the electrolytic performance and the capacitance of the electrodes. This led to the development of a new “Multifunction Electrode” , with one side acting like a supercapacitor, and the other acting as a lithium electrode with slow download. By modifying the electrode with nanodots, developers dramatically increased their effectiveness, and all this without using toxic materials .

The prototype has an estimated 2,000 mAh capacity, more or less what you can expect from a traditional smartphone (although small for a S4) , but StoreDot recognizes that technology needs more development. First, the special charger must be miniaturized (currently it is as big as the phone itself) and the next plan is to adapt it so it can be used in cars . It is estimated that the first commercial version of the battery and charger will be available in 2016, at a price that is double the current batteries. For 30 seconds recharge, I think we’re willing to pay the difference.

Next ArticleImitone -Make music by only using your voice!